Captain Jim and the Blonde
Cruising around, coast to coast, United States
We retired in 2006. Since then, we spent a few years traveling on our boat, Wild Blue. From the Florida Keys to Desolation Sound in Canada, San Francisco Bay to the Erie Canal and down the Hudson River to New York City... going where the weather suits our clothes. Now traveling by land in our Winnebago motorhome. A while back, I published a book about our travel adventures with Molly the Boat Cat; Cat On A Leash is available in paperback and all eBook formats. Molly taught me a lot. After Molly, there was 9 great years with the sweetest cat ever, Izzy (Isabella); our little supermodel feline. Our hearts were broken when her time came, and we are now learning the joy of our new boy, Rufus - another shelter rescue, with a wonky ear, a great attitude, and so happy to have found "his people." Eight years of "fun summer jobs" has taken us to some great places to be in the summer. A bit of boat burn-out with the jobs led us to sell Wild Blue a couple years ago. Boatless for a while, we now have a small pontoon for sight-seeing and dolphin watching when we are in the Tropical Tip. Still anxious to see what is over the horizon.

Ever get that run-down feeling?

I had it twice this morning.  Our community has monthly fees we pay that covers, among other things, lawn mowing.  It is nice to not have to worry about mowing that small bit of grass that we have, especially when we are out and about for several months at a time.

The mowing used to be done by our own employees, but our board of directors decided to outsource it a couple years ago.  The company they first had did a nice job, so someone felt the need to replace them.  The second company was less than great.  We are on the third company now, and the look of the lawns is hit and miss: they use weed-eaters in some areas, where (my opinion) mowing that same area would look better.  It sometimes looks like a bad haircut.

But, no, I don't get run-down from the look of the grass.  They use a riding mower that apparently will exceed the 15mph speed limit in our community, and frequently come darting out between houses or from behind bushes.  I got to see that up close and personal this morning while riding my bike.  Twice.  It happened once a couple weeks ago, as well.

The possibility of getting your body chopped into tiny pieces adds a new challenge to the bike ride.  Frankly, I'm OK with just being out of breath.  ;-)  I can see where it might be hard to see me: I was wearing an neon green shirt with reflective stripes (like what highway workers wear).

Hey, it's 2020.  Speaking of which... one week from today, there will be more cutting.  Assuming I don't get run over by the lawn mower before that.

Back in our studio days, we had different sets and shooting areas, one of which was a high-key cove.  It's how photographers get that shot with an all white background, but still have good saturation on the subject (or product).  It can be done with white seamless paper or an area with a sweep-type background, painted white.

Rufus has his version of a high-key cove... 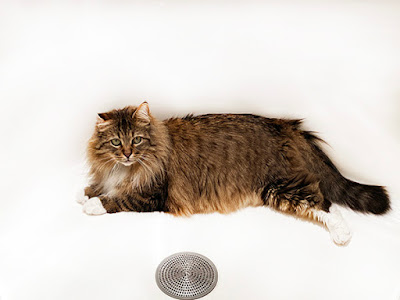 Yeah, it's the shower in my bathroom.  Sometimes, he will go in there and "clean up"... cat kinda cleaning up, with a tongue bath, not taking a shower.  Other times, he sits in there while I'm shaving, so he can keep an eye on me.  He's a stylish boy.

I worked on some vocal tracks again today; that's about 10 days in on this song.  I switched some things around - swapped out one of the dynamic mics and went with a large diaphragm condenser mic.  Yeah, that gave me more of the sound I was looking for on this particular vocal.  Mark had sent me a nice piano track, which inspired me to work some more on the vocals.  It's coming together. 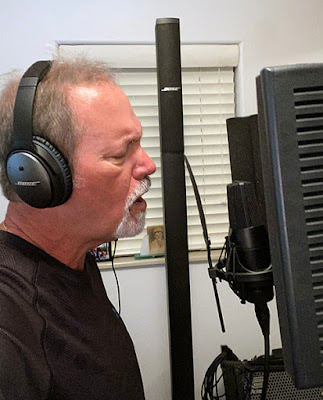 Posted by Captain Jim and the Blonde at 8:18 AM No comments:

Not talking about my second favorite National Park (What?  Grand Teton National Park is my favorite).  I'm talking about the TV series Yellowstone, with Kevin Costner.  We've been binge watching over the last few days.  Season 3 is current and we're not up to that.

Sometimes Rufus will sit with me and watch, too... 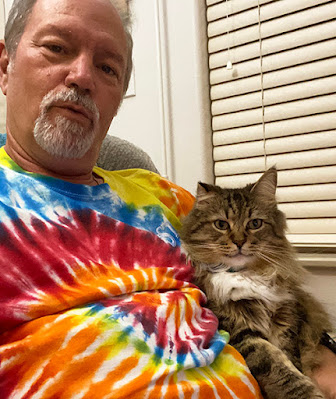 At the end of season 2 today, it was time to get out on the scoot and blow off some stink... 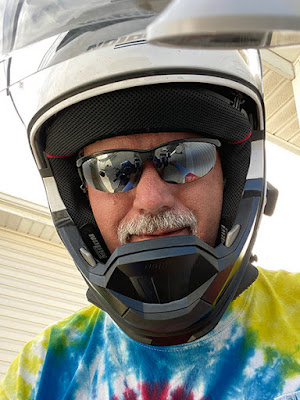 No, Rufus didn't go with me.  Judging by traffic on the causeway and island, there are people coming in for the holiday week.  Yes, we are getting all the same warnings about not traveling or getting together in large groups for the holiday.

Posted by Captain Jim and the Blonde at 2:44 PM No comments:

Rufus?  Yes, he is a world class good boy, but that's only kinda what this post is about.

When I got back from my bike ride this morning, Joan and Rufus were waiting for me out on the deck.  While I was putting my bike away, Rufus was calling for me: "My Daddy's home!  My Daddy's home!"  What can I say - he is my furry boy and I am his person... 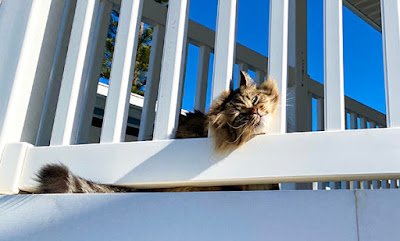 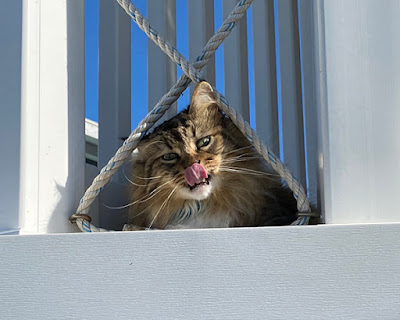 I sent those photos to Steph; she said, "His tongue is huge!"  He is a big boy.

I showed her the photo I took of my buddy Mike's new boat while on my ride... 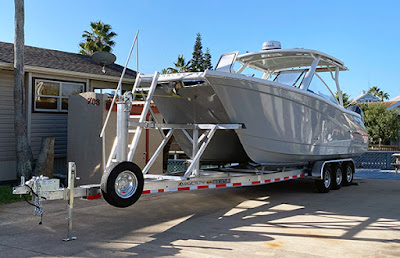 That is a World Cat... that boat is a serious (as in: world class) fishing machine.  After breakfast, I went over for a tour.  Mike showed me around the boat and we discussed some of the systems on the boat.  This is a spectacular boat.  Not my style, even if I had the money, but this is a fisherman's dream.  This should keep him busy for quite a while.  ;-)

Posted by Captain Jim and the Blonde at 2:39 PM No comments:

After taking a few minutes to make another Staying at Home video, I took the scoot out.  Another beautiful day here in the Tropical Tip: blue sky, upper 70s, light breeze.  I make a run across the causeway, mostly just to admire the beautiful water of the Laguna Madre.  No video today, but I did stop for a short bit at a beach access to get off the scoot and take a peek at the Gulf... 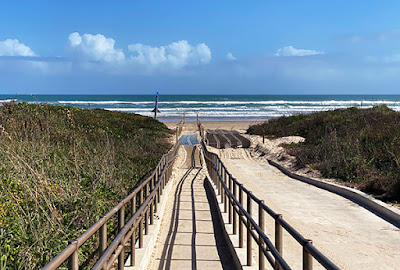 Plenty of parking at this beach access, and not another vehicle to be seen... 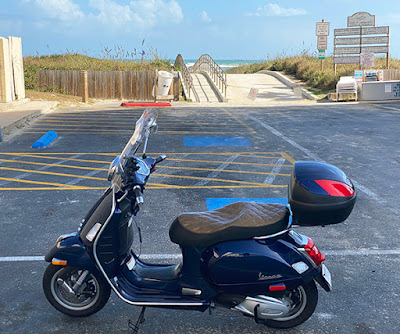 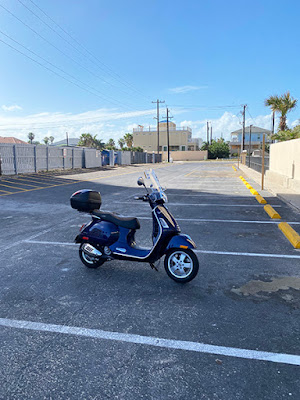 Not a lot of traffic on the streets, but the restaurants had plenty of cars in their parking lots.  As you'd expect, people are being urged to avoid crowds as we come into this holiday season... not seeing much of that happening around here.  That is not a political statement, just an observation; I am avoiding people as much as possible - 10 days until I go into the hospital.  I'd like to go in, and come out, Covid free.

Back to the latest Staying at Home video: another Beatles' song, All My Lovin'...

Posted by Captain Jim and the Blonde at 11:47 AM No comments:

Mark and I have been working on a song for a couple weeks now.  Not everyday, but kicking ideas back and forth.  I recorded several different drum tracks in the last week, but wasn't satisfied with any of them.  As Mark says: "Tracks are cheap - record as many as you want."

This morning, while Joan went to the grocery store, I went into my music room with another drum idea in mind.  One take.  It felt better to me than any of the others.  I sent it off to Mark.  Yesterday during a conversation with him, he mentioned "... maybe a hand-drum track?"  After sending the first file off, I went through the drum sounds on this new set and came up with conga/bongo/scratcher sounds I liked.  Yep, I shipped off a new set of tracks, because... tracks are cheap.

This song may never see the light of day beyond Mark and me, but it has been a different experience working on one song over this amount of time. 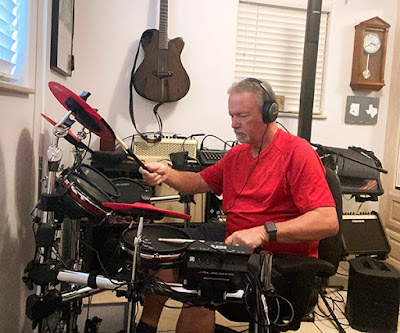 Posted by Captain Jim and the Blonde at 11:36 AM No comments:

If you said, "Joey, from the TV series Friends," you get 3 bonus points.

Today, the answer to that question is: Feeling Alright.  If you said, "Dave Mason, 1968, when he was with the band Traffic," you get 50 bonus points.

Which brings us to another Staying at Home video...

Hope you enjoy it.

Mark and I spent about an hour on the phone today.  Some of it was talking about the song we are working on (finally got a vocal track I can live with), much of it about the new guitar he bought yesterday.  In between Rufus walking on me because it was getting close to his supper time.  Yes, I'm able to multi-task.

Posted by Captain Jim and the Blonde at 10:44 AM No comments:

We live in a gated community.  There is a security building at the gates.  Over the years security procedures at that gate have changed: we used to have two security guards on-duty at all times, and the gates were opened/closed by the guard at the gate while the other guard made patrols around our village.  A couple years ago, a change was made for an electronically controlled gate, windshield sensors on owners' vehicles that activate the gate.  A visitor's gate has a call box where the owner can be contacted and use their phone to open that gate.

That usually works.  Payroll was reduced, with our board of directors and village manager deciding that only one guard would be necessary, considering the electronic gates.  That often doesn't work... if there is a problem with the gate not opening and the guard is out doing rounds, there can be angry owners at the gate, waiting to get through.  Because there are a significant number of rentals within the village, access for those folks needs to be addressed.  It is not unusual for renters to be unaware of rules within our community (OK, sometimes intentionally) and security needs to visit with them.  There are times when 2 guards are necessary (weekends, holidays).

Politics and budget get discussed as the board looks for ways to keep things secure and all residents satisfied that their HOA fees that pay for security are being smartly utilized.

But, that isn't the security I see on a daily basis.  Rufus handles my personal security.  When I use the bathroom, he stands on-watch at the door.  Really.  His back to the doorway, keeping a watch up and down the hallway to make sure no one gets through while I am... occupied.  I am happy to report that there have been no security breaches since Rufus self-appointed himself to that position.  I am able to pee, poop, shower, shave, and brush my teeth without concern.

While he hasn't had to put it to use, he does have cat-like reflexes (duh), can be stealthy as a ninja, and has claws of death.  I asked him, "Would you take a bullet for me?"

Sometimes the appearance of security is enough.

Posted by Captain Jim and the Blonde at 10:20 AM No comments: