Captain Jim and the Blonde
Cruising around, coast to coast, United States
We retired in 2006. Since then, we spent a few years traveling on our boat, Wild Blue. From the Florida Keys to Desolation Sound in Canada, San Francisco Bay to the Erie Canal and down the Hudson River to New York City... going where the weather suits our clothes. Now traveling by land in our Winnebago motorhome. A while back, I published a book about our travel adventures with Molly the Boat Cat; Cat On A Leash is available in paperback and all eBook formats. Molly taught me a lot. After Molly, there was 9 great years with the sweetest cat ever, Izzy (Isabella); our little supermodel feline. Our hearts were broken when her time came, and we are now learning the joy of our new boy, Rufus - another shelter rescue, with a wonky ear, a great attitude, and so happy to have found "his people." Eight years of "fun summer jobs" has taken us to some great places to be in the summer. A bit of boat burn-out with the jobs led us to sell Wild Blue a couple years ago. Boatless for a while, we now have a small pontoon for sight-seeing and dolphin watching when we are in the Tropical Tip. Still anxious to see what is over the horizon.

Sir, could you help me?


No, I wasn't looking for help.  Out for my morning walk, in the chilly fog, an elderly lady called out to me.

She explained that she needed help in getting a set of heavy wooden stairs inside her travel trailer.  She said, "My sons usually do this, but I need to show them I am fine on my own."  Yes, I understand the "on my own" stuff.  There is no way she could lift those heavy steps (made with 2x6 lumber) into that trailer on her own.  Pretty sure I could not lift them in their on my own... especially since I am still not supposed to be doing any heavy lifting.

I said, "If you can lift that side, I'll lift this side, and we'll tilt the steps into the door opening."  We got it done.  I was feeling pretty good about myself, since that is the heaviest lifting I've done in over 4 months.  "Is there anything else I can help you with?" I asked.

"Well, I don't think I can undo the water connection myself."

I said, "Let's take a look."  I turned off the water and unhooked it from the city supply side and at her trailer connection; someone with a killer grip had snugged it up tight at the trailer.

She said, "My son used a wrench on that."  No doubt.  I took some grunting, but I got it loose.

"Well, I better be moving on before my wife worries..." I explained that I had surgery 4 months ago and Joan knows about how long I will be gone on these walks.

"Oh, I am so sorry - I hope you didn't hurt yourself with that lifting..."

"No, it's all good."  She told me that her husband passed away 6 years ago and she didn't want to give up "camping."  She is from North Dakota and keeps her trailer stored here; the storage folks move it in and out for her.  And today, it is time for her to head north.

I wished her safe travels and continued on my walk.

By 10:30 the fog had burned off and the beautiful clear day that the young weather weasel on the morning news had promised looked like it was going to happen.  Joan asked if I wanted to go to Custer... for a ride and a burger?  She didn't have to ask twice.

I got the bikes out.  The wind was starting to pipe up.  No mention of that on the weather this morning.  In spite of the gusty conditions (only an issue in open areas, and there aren't many of those through all the fun curves), we had a great ride to Custer... 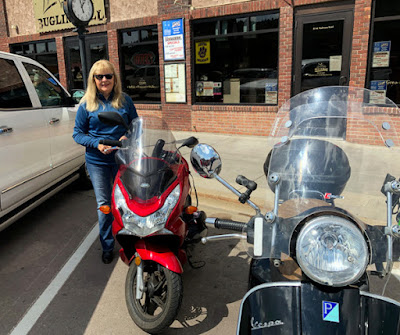 The food was good; we got a table right away because the lady taking names for seating said, "I have a table that most people don't want - I can seat you right away if you want that.  Would you like to take a look at it?"

"Absolutely."  It was more of a counter - no problem; Joan and I can sit side by side and play kneesies while we wait for our food.

We gassed up again before leaving town; Joan got 129 mpg, I got 94.7 mpg.  Seriously, this mileage is unreal!  We decided to take a different road back through the park, one that we haven't been on in years... it essentially runs up the western border of the park, then turns into the park right near Sylvan Lake.  It turned out to be a fun road: great curves that were pretty "easy" compared to some of the tight ones we usually manage to find.

We weren't planning on doing Needles Highway again, but that is pretty much where this road led.  Not as much traffic today (anywhere, but not much on Needles Hwy, either), until we got to the really tight tunnel at Needles Eye... 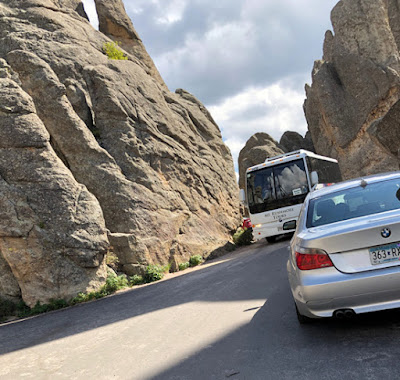 There was a by-stander directing traffic - we found out why when this bus came through the tunnel!  Obviously designed for this road, the bus is a bit narrower and shorter than a typical bus (that could not make it through that tunnel).  Check out the sign on the front windshield... 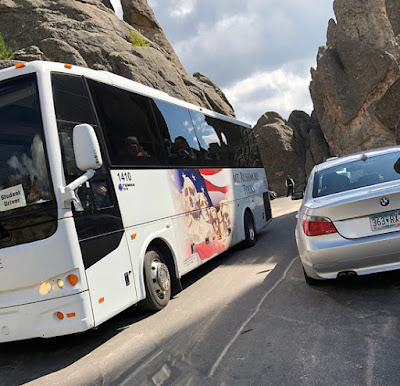 Yep: "Student Driver"!  There was a round of applause and cheers from people in cars waiting their turn to get through the tunnel.

I didn't bring a camera along today, but I had my phone mounted on the handlebar to use it for the GPS info.  I swing the phone around to get these photos and a few more.  A blurry look at our turn through the tunnel... 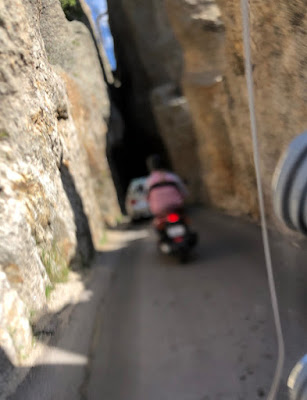 Once on the other side of the tunnel, traffic going our direction was light.  We passed some sports cars left over from this weekend... 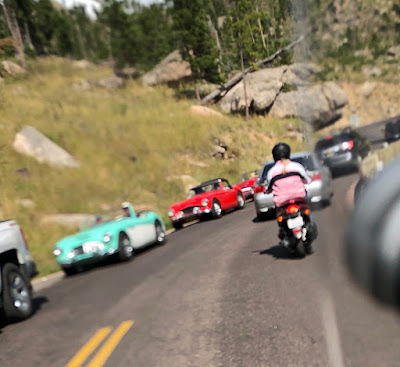 The weather was still windy, but pleasant (mostly 69º to 77º on today's ride).  We weren't able to ride in an overly-sporting manner on Needles Highway with the traffic that was there, but the only slowdown was two Harleys (and then a couple cars between them and us) who were driving the slow speed limits on this road... 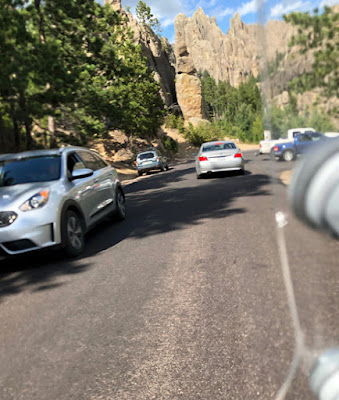 Really glad to not be behind this bus going the other way... 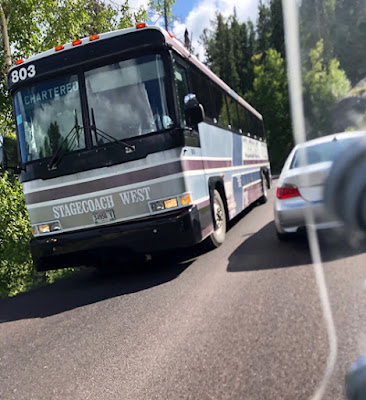 That is a standard size bus and it can't fit through that tunnel - they take people to within a couple hundred yards of the tunnel, then all those people spill out onto the road, and walk the rest of the way while the bus driver gets the bus turned around in one of the snug parking areas.  Yes, it is a shit show... but, not for us because we were already beyond that!  Wooohooo - one in a row!

I didn't get a photo of it, but there was also a white Suburban going the other way that came almost to a stop as it went around the curves... yes, leaving a line of traffic behind them.  And, this was on the part of the highway that has stripes and the road is only narrow... not, really narrow.  I kinda wanted to turn around to see what that Suburban driver would do when they get to those really narrow places and that skinny tunnel.  Only kinda.

The striped part of the highway... 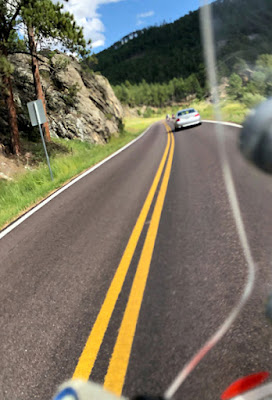 Back to the twisty roads that take us home.  Again, almost no traffic... well, if you don't count the occasional deer on or beside the road.  We are getting into "that time" of the year, where the young deer move out on their own, and haven't figured out this whole traffic thing.  Plus, the nights are getting colder, and the deer start moving to lower elevations.  One thing I did hit in the road today... a snake!  It wasn't like I was trying for him, he just darted out there from the shadows.  Not sure what a Vespa does to a snake, but I also wasn't going back to find out.

Back at Hart Ranch, Joan stopped to pick up a package at the Lodge while I went to our site to get the trailer open... then provided her "valet service" of moving the bike in and hanging up her jacket.  In the package was a replacement strut for one of our cabinet doors - the old one gave it up, and you need the strut to hold the door open (it opens up).  We had the new strut on in a few minutes and Joan took the door for a test ride: yep, works just like new.

And, yes, Rufus got some leash time, too.  A good day!


Posted by Captain Jim and the Blonde at 5:04 PM